Midtown Manhattan has an abundance of good lunch spots, and Rickshaw Dumpling Bar decided to join in too! They opened up a branch on Lexington Avenue and East 45th Street last year.  Walk by during lunch time and you'll often spot a crowd milling around the tiny corner store.  It's take out only here, as there are no tables (except for a 6 foot long ledge along the window). 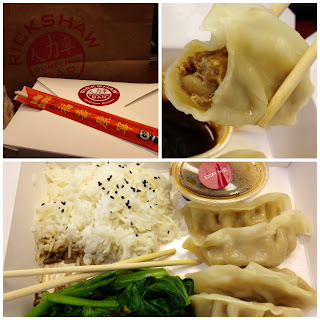 I've known about Rickshaw Dumplings for years but it wasn't until their food truck made an appearance at a holiday party last year that I actually tried it.  Wonder why it took this dumpling lover so long? I've heard very mixed reviews, with negative comments coming mainly from friends who have grown up eating authentic fresh made dumplings like me.  I wasn't wowed by the dumplings I had at their food truck, but I chalked it up to the limited facilities they had working out of the truck. 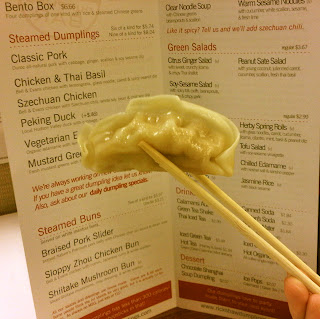 I've visited the Midtown branch a couple of times since they opened.  While I'm not impressed by the dumplings, it's a nice break from the regular soup/salad lunch options and is still light enough since they're steamed.  I've tried the Pork and Chive dumpling and also the Szechuan Chicken one.  The skin is nice with medium-thickness, but the meat fillings can tend to be a little dry and lacking flavor.  Each order of dumplings comes with a little container of sauce which varies depending on the dumpling you order.  The sauces are tasty and unique!

One main thing I can't get over is the price.  An order of 6 steamed dumplings costs $6.25 (including tax). That's a dollar a dumpling! That may seem average for Midtown, but that's highway robbery compared to Chinatown prices.  I also wasn't really full, just satisfied enough.


I've also tried their Bento Box for lunch which comes with 4 dumplings, white rice and steamed vegetables for $7.25 (including tax).  This is definitely a better deal, since for $1 more I actually was pretty full.


While it's a decent lunch option to add into the rotation, the prices are steep.  There are places in Chinatown (and especially Flushing!) that make better tasting dumplings for a fraction of the price.  One thing I really like is their ingredients are natural and they proudly identify where they get their food.  It's refreshing to know where the meat is coming from these days when so much food in restaurants are overly processed!

On the topic of knowing what goes into your food... I recently got into making my own dumplings like my parents and Grandma used to and I'm pretty shocked they turned out really well!  I love putting in whatever I want and most importantly, using organic meats and vegetables as much as I can.  (Yes, I'm a sucker for organic, when I can afford it. I firmly believe it makes a difference, especially with Chicken!).  I'll get around to posting about it one of these days!  In the meantime, thanks for reading :)