I've been on a tea kick lately and have been loving all the new tea spots that I've finally been getting around to discovering!  One I've heard so much about for a while now is Cha-An Japanese Tea House.

Located just a block off from St. Marks, this little haven is tucked away in a totally zen second floor space. Just as the sign in the picture below says, when you walk into the Cha-An space you really do "leave your cares behind" and "just feel the quiet moments" as you relax and enjoy their tea house setting 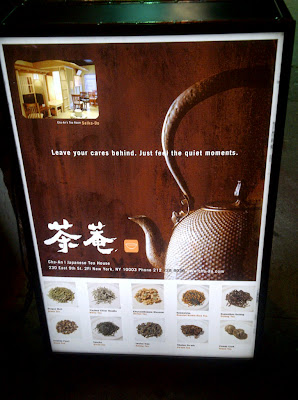 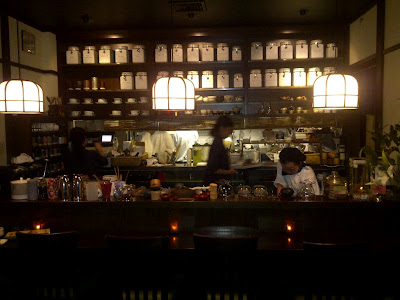 As this was my first experience at Cha-An, I was excited to try everything - including the food!  While perusing the menu, however, I noted that there are only 2 options for non-dessert food items: Set A and Set B.  As there were two of us at dinner, the clear solution was to get one of each set (well, actually there were two pairs of us but we both did the same and shared sets)!


This set came with a big bowl of hearty rice porridge and five small side dishes (including salmon, two types of pickled veggies, bean sprouts, and small fishies).  The side dish was a mushroom and chicken type stew/dish.  All seemed very traditional.

Set B started with the soy milk quiche.  This was DELICIOUS and definitely my favorite part of the meal.  Interesting flavor and soft but oh so tastyy - mmm mmm mmmmmm. The rest of the set was served with a corn soup, a couple pieces of smoked salmon, two side dishes (chicken curry and a veggie dish) and a serving of rice.

You'll notice that I crossed-out "choice of tea" from both sets.  Apparantly, each set used to come with tea but as of January 2012 they eliminated the tea option in order to maintain the same quality standard while battling rising food costs (or so their posted sign said).  An order of tea alone starts at $7 so the elimination of tea is pretty much a 30% increase in the price of the meal!

Overall, you can tell that all the food was definitely made with care.  Nothing tasted bad but, other than the quiche, nothing really stuck out as special or had me hankering for more (or at least planning my next trip).  This lack in spark, coupled with the price increase from the tea elimination and Cha-An's no substitution policy (due to their limited menu) sadly leaves me to give the Cha-An meals a...

HOWEVER, what I didn't discuss in this post was the dessert that came with the sets nor the tea that we ordered.  These both DID have me hankering for more and I HAVE returned (multiple times!) for more tea and dessert.  I loved both so much that I am dedicating my next post to discussing Cha-An's dessert and tea...stay tuned!!  For now, I leave you with a teaser photo of whats to come -

Thanks for reading - Piggy KK
Posted by katie + katie at 8:00 AM