Well folks, as you read this I am probably on my way to LA!  I'm taking a quick trip to visit a friend and I'll be sure to eat all the West Coast goodies.  For those of you looking to get a bit of your own West Coast grub in NYC, head on over to Wahoo's Fish Taco.

As you walk into Wahoo's Fish Taco, you'll see that it has a super casual, relaxed, surf-themed vibe - reflective of its California roots!


If you happen to come during Happy Hour (goes until 7pm), you'll score some great drink deals on select cocktails and beers.  And they come out hugeeeeeee:

More interested in the food?  Then walk towards the ordering counters at the back - you'll see the menus along the wall there.  You'll be happy to note that almost everything on the menu is $10 and under!  Place your order first and then take a seat at a table of your choice with your number if you are staying to eat.  Someone will bring out your food to you.
Read more »
Posted by katie + katie at 8:30 AM 16 comments:

As a child of NYU, I can't help but have a soft spot for the Thai food at Spice (and those shrimp fritters...).  But there's a new rival in town!  Ngam has opened in the East Village and I'm obsessed!

When you walk in, you'll notice a modern feel with exposed piping, brick walls, wooden tables, and an open kitchen on the right.  More often than not, you'll also see the chef and owner Chef Hong making her magic in the kitchen as you walk by towards the dining room.

Ngam really sets itself above other Thai restaurants by offering a really unique and inventive menu.  In addition to the noodle and curry dishes that are staples in traditional Thai restaurants, Ngam also offers special creations such as Lamb "massaman" Roti Potpie, Lobster Dumplings, and Thai Oyster Shots.  Take a look at their full menus here.

I've been to Ngam several times now, as well as ordered take-out even more times.  My definite favorites have been:

After 10 years of living in NYC, I've finally made it to Cafe Habana and have tasted its Mexican Grilled Corn!  Holy smokes....I've been missing out! 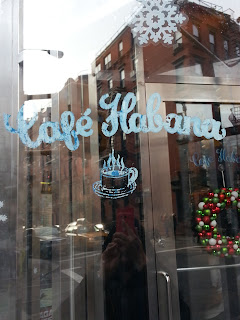 Located on a corner in SoHo / Nolita, it looks like an unmarked diner on the outside.  On the inside, it still looks like a tiny (but packed!) diner.  Definitely tiny, so be prepared to wait.  We arrived around 1:45pm and it was a half hour wait.  As we left around 3:30pm, the hostess was still quoting a 40 minute wait for interested parties.

We came for brunch, so I was torn between ordering a brunchy egg item or a "regular" item. The corn, however, was a must and definitely happening.