This is my first "Piggy says no" review.  It's sad, but this day had to come eventually.  I hope you allow me to explain why I found my experience so disappointing...

Having heard nothing but glowing reviews about this BBQ place in Williamsburg, Fette Sau quickly moved to the top of my "must try" list.  It’s understood that there is a decent wait during peak times, so my friend R and I decided to give it a go on a weeknight at 6pm (and keeping our fingers crossed that no one else likes to eat at granny times which, btw, I specialize in).

Upon arrival, we noted that there were only a handful of people in front of us and thought “Score - we beat the rush!”  Oh boy, were we wrong.  The handful of people in front of us turned into a miserable and slow 35 minute wait.  As we made our way to the front, I noticed that the inefficiency was due to the lone guy in charge of putting together your selection of meats.  While I appreciated the love he put into each order, it was frustrating to see three other people milling around behind him just waiting for side orders.  I can assure you, the side orders definitely don’t take nearly as long as the meat.  Isn’t there a more efficient way?  Didn’t anyone take operations management and learn about Just-in-Time systems (sorry, the business school side of me escapes every now and then…)?


Maybe I was just grouchy from a long day of work and hungry from smelling BBQ for the last 35 minutes.  Whatever it was, I decided to put my frustration aside and focus on what I was here for – glorious BBQ.  Lucky for eaters that day, it was the first Thursday of the month and Fette Sau offered “Fat Pig Thursday” where an entire pig is roasted for that night’s meal.  Take a look at the menu: 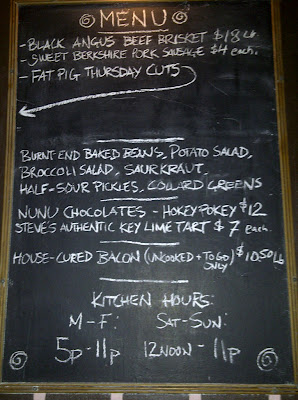 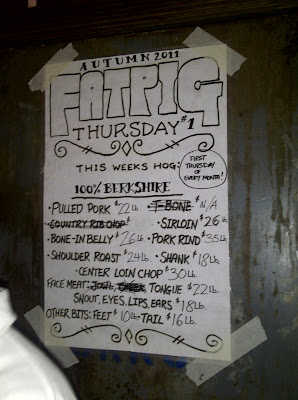 While I’m not a big pork eater (I pretty much just stick to bacon), we couldn’t pass up Fat Pig Thursday and ordered half a pound of Bone in Pork Belly.  [Note: orders of meat are by the pound here and they suggest about half pound of meat per person.]  Looking for a non-pork option, I noticed that there was only one: Beef Brisket.  So looks like I’ll be sticking with a half a pound of brisket!  It was disappointing that there were no chicken/wing options poo.  And to round out our meal, we settled on a couple sides including baked beans, pickles, German potato salad, and orange sodas.


When we went to pay, here is where it got dicey.  Our bill came out to $42 and we asked the girl to split it between two cards.  Her response?  She informed us that she doesn’t normally split for such a small amount (um…$20 each is a decent amount no???), BUT she would do it for us and would expect a tip on each card since there was such a long line behind us.  In my book, asking for a tip is a no-no.  Asking for a tip and trying to hint that my request would slow the line down even more is a BIG NO-NO (heck, you are one of the three milling around behind the counter!).  I’m pretty sure the lone guy working the meat is the bottleneck, not me asking to split the bill.  The one redeeming factor?  She threw in a couple extra potato rolls onto our tray.  Lady, you’re lucky I’m a carb monster and can be pacified with a couple rolls!

After that frustrating experience, I definitely felt like I needed a drink.  Fette Sau has some great local beer options which you can purchase by the glass or by the growler, but it’s a separate counter and separate line for alcoholic drinks.  I was much too tired to wait on yet another line, so I decided to just try and enjoy my dinner.


There are fantastic seating options available here – several tables outside for nice weather and group tables inside which really added to the atmosphere.  We squished between two groups and excitedly dug in!

The potato salad was chunky and tasty, the baked beans terrific, and pickles refreshing.  The beef brisket, sadly, was way too fatty for my liking.  I picked at what meat I could find and was left with a huge pile of ick on the side.  The pork, surprisingly, was extremely tender and had great flavor! 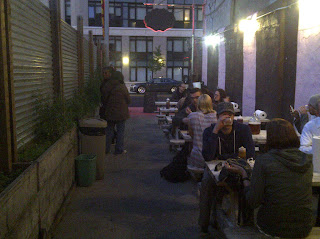 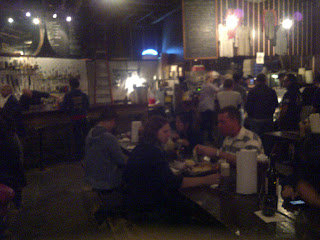 Sadly, the food wasn’t good enough to salvage my overall experience at Fette Sau.  The long wait, travel time, and terrible attitude of the lady behind the cash register left an exceptionally strong sour taste in my mouth.  Yes, the food was good, but I can get equally tasty BBQ at Hill Country or Blue Smoke in the city.  And if I’m travelling for BBQ, might as well make it worthwhile and go to Dinosaur BBQ in Harlem (my personal favorite!).  All three offer reservations, leaner/non-pork options, and most importantly smiles when paying.

Thanks for reading – Piggy KK
Posted by katie + katie at 9:00 AM