Can you believe that it's already the Wednesday before Thanksgiving?  For those of you still working on your menus for tomorrow, I have a great recipe for you!


It's a Honey Glazed Ham.  And it was SUPER easy to make!!  Ok, I'm not a big pork eater but something about this recipe (I do love honey...) was calling for me to make it!  Apparantly, Honey Glazed Hams are popular and commonly ordered for the holidays (my ignorance on meat products is appalling I know...forgive me).  I decided to take the challenge and make my own Honey Glazed Ham for under $20.  Similar to the Cheddar Bay Biscuits I recently made, I picked a recipe from allrecipes.com and incorporated some minor adjustments from other reviewers.  Take a look at how simple it is:

*I picked a 6 pound pre-cooked/smoked ham.  A cheap supermarket ham works great with this recipe! 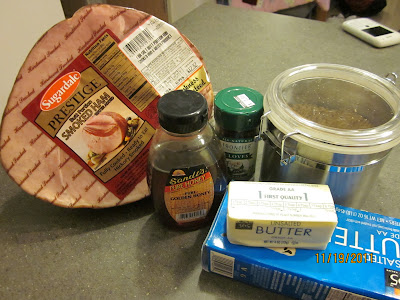 Directions:
Preheat oven to 325 degrees F (165 degrees C).  Take your ham and score it.  When I first started this recipe, I had no idea what "scoring" meant.  In case you have no idea either, to score your ham is to cut diamond patterns into the fat.  Start with a sharp knife and lightly cut diagonal lines across the fat (approx 1/3 inch deep and 1 to 2 inches apart).  Then cut lines going in the other direction, creating a diamond pattern.  This not only makes the ham look great but also helps the glaze seep into the meat.

Once you score the ham, stud the corner of each diamond with a whole clove.

Place the scored and studded ham in a foil lined pan (make sure you line heavily - the glaze is ridiculous to clean...).  In the top half of a double boiler or in a small pot on low heat, warm the brown sugar, honey and butter. Keep the glaze warm while baking the ham.

Brush the glaze over the ham and bake in the oven for 1 hour and 15 minutes. Baste the ham every 10 to 15 minutes with the honey glaze. During the last 4 to 5 minutes of baking, turn on broiler to caramelize the glaze.

I actually put the ham in one of those oven bags and poured all of the glaze over the ham.  Then I flipped the oven bag every 15 to 20 minutes instead of basting.  Less mess this way!

Once done, carefully take the ham out of the oven, snap a picture of your masterpiece (first pic above is my finished ham), and enjoy!!  Easy peasy right???

Now go forth and make ham!  Take a picture of your masterpiece for me and let me know how it goes!