I'm a pretty picky eater but when it comes to vegetarian restaurants, I'm all in!  Sadly, usually Piggy KL is my only volunteer to accompany me to a meatless establishment.  But on this trip to Dirt Candy, we were both so glad to have tried it!

Dirt Candy is run by Amanda Cohen, a vegetarian chef who competed with Morimoto on Iron Chef!  Its a tiny restaurant in the East Village (only 18 seats available), definitely make a reservation before coming and keep an eye out for the restaurant otherwise you may walk right past! 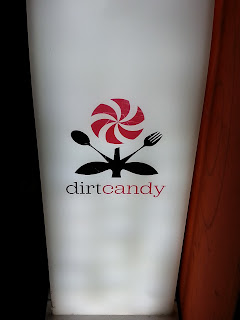 Its a pretty small menu with each item named after the primary vegetable ingredient (note: the menu changes seasonally based upon the current vegetable offerings).  Although small, each offering sounded so appetizing!


To start, Piggy KL and I went with the Jalapeno Hush Puppies and the Mushroom. Both were excellent!!!!  The Jalapeno Hush Puppies were freshly made and served warm.  The jalapenos gave it just that bit of a kick (but don't worry - its not spicy spicy).  The maple butter that accompanied the hush puppies was amazing and went really well with the dish.  I was scooping that onto each bite by the spoonful!

The Mushroom dish was gorgeously plated and served with truffle toast, portobello mushroom mousse, and pear & fennel compote.  The mousse had such a smooth texture and a subtle yet true fragrant mushroom flavor.  The toast was served crispy (like a large crouton yum!) with a light truffle taste. I highly recommend!


For entrees, Piggy KL choice Corn and I went with Cauliflower.  The Corn dish is served with stone group grits, corn cream, pickled shiitake mushrooms, and a tempura poached egg!!!!!  This was an extremely rich dish.  If you are worried that you won't be full at a vegetarian restaurant, order this dish and you will be overstuffed!  The tempura poached egg was a unique dish - basically a fried egg dish with the yolk still a touch runny and super tasty when mixed into the grits!

Cauliflower was served with buttermilk battered cauliflower, waffles, horseradish, and wild arugula.  The cauliflower was perfectly crispy and delicious but sadly only served with three or four pieces.  The waffles were thin (I prefer thick waffles) but soaked up the flavorful sauce - you could taste the horseradish, which was more like wasabi.  While not a large portion, this was able to fill me up.


And no dinner is finished without a bit of dessert! I'm a huge fan of anything minty so I convinced Piggy KL to share the Ice Cream Nanaimo Bar with me.  This was a sort of minty ice cream sandwich - nice and minty way to close out our meal!


Overall I had a great experience at Dirt Candy and enjoyed the inventive and delicious flavors.  Although a vegetarian restaurant, the chef does a great job making an interesting menu with fresh ingredients and a fresh view.  If you get a chance, make a reservation and give Dirty Candy a try yourself!  I think you'll love it too.