Last week, a girlfriend and I decided to treat ourselves to a nice sit-down lunch.  We picked Mai Sushi located on that street in Midtown East with all the Japanese Restaurants (41st between Madison and 5th).  We had both been to the original restaurant when it was run under a different name, but have yet to give this new version a try!

Similar to the old restaurant, the front half of Mai Sushi offers a cold case of ready-to-go items.  Everything looked tasty and I was particularly attracted to the rice bowls (or anything with rice for that matter), but I usually prefer my hot food served hot (not cooked hot, then put in a cold case waiting for me to purchase chilled because the Health Department wills it so. poo).  Only select items such as the tempura and gyoza were in the warm window.  Sushi looked fresh though!

My dining compadre and I headed to the full service restaurant in the back.  Its a simple space with a couple tables and a sushi bar offering a nice escape for lunch.  After settling into our seats and taking a quick perusal of the menu, we both settled on the Teriyaki Chicken and Tempura Bento Box and a hot green tea (that's one bento box each - I don't enjoy sharing!).  For $12.00, the bento box comes with a miso soup, salad, california roll, shrimp and veggie tempura, and chicken teriyaki.  What a steal!!!  Not one to pass up a deal (or the sound of a promising meal), I just had to go for it.

First up, the miso soup!

Miso soup is always tasty and pretty difficult to screw up right?  Well I found the exception here.  Not only was it a touch watery, but instead of tofu the soup came with cabbage bits.  Ugh...what an odd combo.  Cabbage instead of tofu?  What a travesty!!!  I just couldn't bear the taste and pushed the soup aside unfinished.

Shortly after the soup debacle, our entree is served!  Hurrah!! 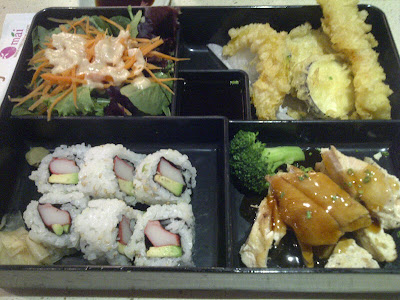 I'm usually a huge fan of the ginger dressings served on salads at Japanese restaurants, but this one was....different.  It was pretty much warm mayo on my salad.  Alas, another unfinished dish on my plate.  No time to pout...moving on!

As a non-raw fish eater (don't judge meeee!), california rolls are pretty much my bread and butter (along with eel rolls, spider rolls, and other tasty delights of course).  However, these rolls tasted like supermarket sushi.  No good, but I ate them all anyway since I was getting hungrier even as the food was sitting front of me.

The tempura and chicken teriyaki were good though.  Nothing special, but standard.  As you can see in the pic above, the chicken teriyaki was comprised of plain chicken pieces with some teriyaki sauce on top.  I liked it as I really enjoy simple chicken breast but my dining compadre thought it was eh.  And the teriyaki was served with NO rice!  How??  Sobbbbb...

Overall, the only real enjoyable and stand-out portion of the meal was the green tea.  A good green tea served with sub-par to mediocre food is not good enough to merit a return trip in my book.  Save your money and stick with Cafe Zaiya (post to come!) next door for lunch.

Thanks for reading - Piggy KK
Posted by katie + katie at 8:00 AM