Lucky for me, one of Bian Dang food truck's regular lunch stops happens to be across the street from my office. If you can't make it to their food truck, don't worry because they have a store front inside the Food Court in K-town (West 32nd Street btwn Broadway and 5th Avenue).

More recently, I tried their Zongzi (Chinese tamale) and steamed pork dumplings. The dumplings were meaty and plump with thick skin (my favorite kind). For $3 it was worth it!

Unfortunately I'm mixed on the Zongzi. I've gotten it two different times and both instances it was not evenly cooked through. There were parts where the rice was hard and, well for lack of a better word, uncooked. I just ate around these parts, as the rest of the Zongzi was still good. It was disappointing because I was so excited that the truck actually made it!  A well-made Zongzi is a hard find in NYC ever since the Queen of them, May May on Pell Street (Chinatown), closed down several years ago.
Bian Dang's are decent - the Zongzi are a good size and the ingredients are savory and plentiful.  If only they were fully cooked!

In any case, I don't know of any other Taiwanese food trucks floating around the city so I'll probably still return. Maybe next time I will give the Fried Chicken over Rice another shot. 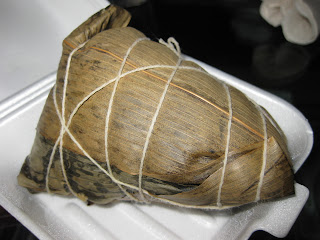 Piggy says eh for the Zongzi, but yes for the truck!